Have you ever re-read a review after reading the book? The inaccuracies and quotes out of context can be quite startling.

State by State: A Panoramic Portrait of America

It is also not the first time that I've been struck with the thought that it is the reviewer's writing that often causes me to pick up a particular book rather than the author's. I did not, as the reviewer presumed, skim through the book, picking and choosing states' essays because of my history with them.

I actually read cover to cover, visiting each state alphabetically. I strongly recommend this approach, because having lived in a state does not guarantee you'll enjoy that state's essay. Indeed there were three states well, two plus D. As I read, I tried to find a theme that separated a mediocre piece from an outstanding one. Should the author be a native of his or her state? Not necessarily. The Delaware section was written by a Canadian - the nerve! Must the writer love the state? Not at all.

Rick Moody's always outstanding writing was thoroughly enjoyable all while convincing me that Connecticut's Merritt Parkway might actually be the road to hell, with layovers in Alcoholism, Divorce, and Depression. It helped - tremendously - for the topic to be personal rather than didactic only Idaho's Anthony Doerr managed to do both , but a couple of the clunkers were quite personal. It turns out that the only common thread I could identify was ephemeral: the essayist had to "capture" his or her state.

He or she had to transport you, make you feel you could see, hear, smell the things being described. 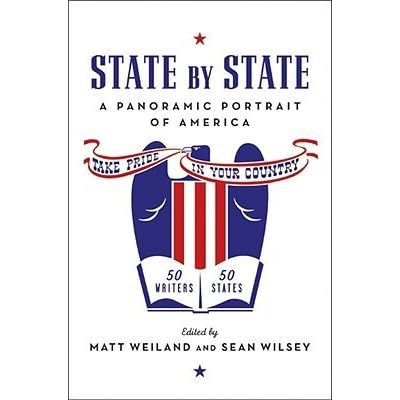 That is probably true of most good writing, though I was surprised by the names that failed to accomplish this. Brian asked me what my favorite section was. I was deeply offended to discover that the Florida chapter's author was born and raised not in Florida, but in Danville, IL, until age 11 at which point he did, in fact, move to the Keys. From there he proceeded to attend the University of Iowa? This gentleman was going to tell the story of my Florida? I think not. But all was forgotten when he revealed that he won a writing contest sponsored by Jimmy Buffett, and as such won a tour of the local Keys with Buffett himself.

His essay made me laugh, tear up, and nod knowingly, thoroughly recognizing my crazy state and all that I love about it.

That, in the end, is what what I was really looking for. I loved this book.

There are some fantastic essays in this collectionand a few bad onesand the roll call of writers who participated in this anthology is impressive: S. Each author takes a different state and contributes a piece of writing about that state. Some of the writers were born in the state, some just visit or have spent time there. A great way to take a cross country trip without paying thousands of dollars. This is a great book to keep around and read and savor chapter by chapter.

A lot of thoughtful, insightful, entertaining and frequently funny stories that really make you feel the state you are in. Comes with a DVD by the various writers.

Excellent project, especially in a election year I was not aware of this book when it was published in , but am really glad to have stumbled across it now, working back from the essay on New York contributed by Jonathan Franzen and republished in his collection, Farther Away. It's clever, but others in the book are equally good, or better.

State by State was inspired by a Depression-era series; the Works Progress Administration hired unemployed authors to write volumes on each of the then 48 states. This time, it's a private venture, in one volume, but it's a treasure trove of essays by a diverse crew of writers, including William T. The author list is overweighted with residents of New York City and contributors to This American Life, but any collection of odd essays is likely be skewed somehow.

Collectively, the essays do a good job of reflecting the experiences of long-term residents, immigrants, folks who grew up and moved away, and temporary visitors. In some cases, particularly for the most personal essays, I finished an essay thinking, 'well, they spent ten pages on this state and never got out of the main cities', or, 'well, that may be one slice of that state, but it doesn't match my experience there at all' - but that ended up making the essays more rather than less interesting.

Other authors make a real effort to survey their states. Some of my favorite contributions included: Dagoberto Gilb Iowa, with a particular focus on migrant workers in the corn fields ; Jack Hitt South Carolina, on the transformation of Charleston ; Randall Kenan North Carolina, a triptych on pigs ; Jhumpa Lahiri Rhode Island, one immigrant family's experience. Editors Matt Weiland and Sean Wilsey both agree that they were heavy, interactive editors.

I think [the writers] saw very quickly we wanted to make a book that would still be read decades from now I hate New England. New England somehow flattens that. I think you can see that in the [accompanying] picture. Select institutions received complimentary copies of State by State.

Many educators received the book with respectful interest and enthusiasm. On the website The Millions, a teacher asked whether he should assign the book in his 21st century literature class. Carlos, from American University in Washington, despised me on sight. This was upsetting, because I had gone South with the idea of becoming a latter-day soldier in the civil rights struggle.

I saw myself, in all modesty, as an heir to Schwerner and Goodman, the two white northerners killed in outside Philadelphia, Mississippi, with their black movement colleague Chaney. But it was hard to sustain my own private freedom ride after I discovered that Carlos kept a personal roll of toilet paper in his bedroom, ferrying it back and forth to the john. So much for black and white together.

That first weekend, before contempt had hardened into hatred, Carlos and I went out to get a bite to eat. It was little consolation that Raymond, the other housemate, from Rutgers and gay, liked me fine. The law center was opening satellite offices in the rural counties north of Mobile Bay, and I spent many days doing advance work by way of Greyhound buses to Monroeville and Evergreen. These were some of the poorest places in America. Conecuh County was even poorer. The revolution of the early sixties had blown through the bigger cities in Alabama and barely touched these piney backwoods.

I was looking for something-marches, drama, self-sacrifice, community, history-that now existed only in books.